‘The Butterfly / fairy child’
by tusa-alexis

to catch me, Hmmmmm? give me your smile
and a flower of patience you must be.
Still your soul
Still your mind

Then just maybe?
my stillness in flight,
I will give to you
lightly by your side

If need be for utterence,
be it but a whisper,
the echoe of a trusting heart
then maybe you can decide

My beauty and your smile
forever, together
flying and free
for you and me

For you my Love
I will give my smile
for it is given free
like the the land, the air, or the sea

Thankyou
I Love You
Be free” 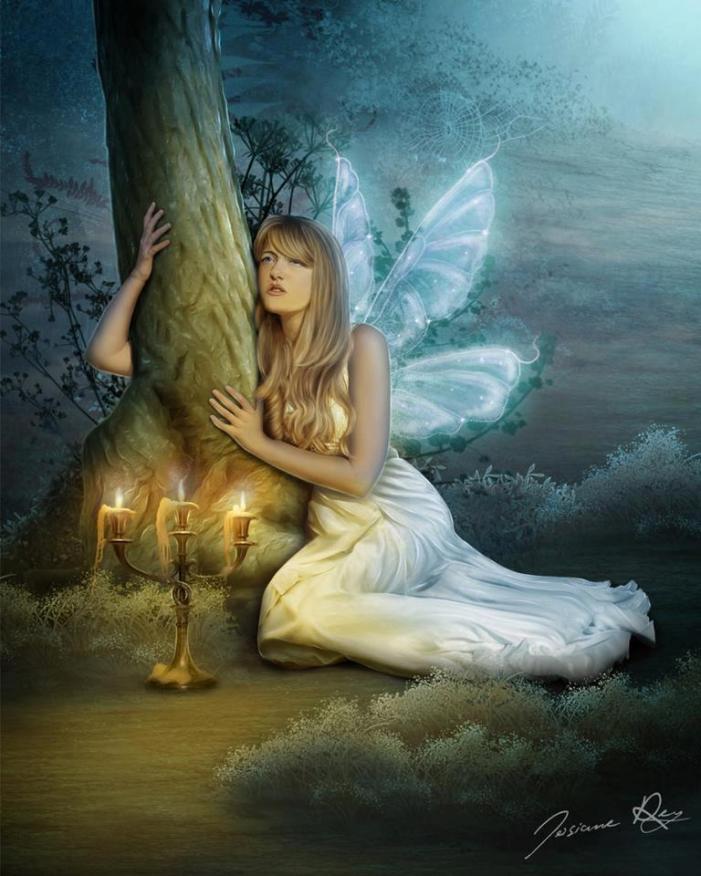 “The Faerie Folk have inhabited the hills, valleys and plains of the Earth since
the very beginning of time. Shamanism is as old and as vast as the night sky.
Paganism, as a religion based on paganism, has been a part of humanity since the
building of the first small communal village. Faerie Paganism is a modern
expression of these three Universal Creations.

Faerie Shamanism and Paganism is a religion and belief system of great personal
and universal power. Imbedded in the Faith of the Fey is a deep reverence for
the Earth and all of her bounties, a firm belief in the Faerie Folk of the
Ancient Celtic and Norse Worlds, a respect for all life from the tiny insect to
the gigantic whale, a personal internal and external power called Magick, a love
of the nature inherent in human beings both inner and outer, and a communion
with the Ancient Divinities of the Earth, Sea, Sky, and Stars.

One of the first and most important beliefs of Faerie Paganism is a respect for
the Earth and an environmental consciousness which runs so deep it connects with
the divine spirit within. Energy and healing are gained from the soil. knowledge
and wisdom are gained from the trees, cleansing and purging comes from the
lakes, rivers, and streams. protection comes from the rocks and fire. The Earth
is a magickal, mystical Realm which mirrors the Astral Other Worlds and it is
important to see her as the Ultimate Mother who nurtures and protects her
children, whether they are Faerie, Human, Animal, Plant, and Mineral. Rites are
practiced which attune the seeker to the harmonious workings of the seasons of
nature.

Faerie Paganism has a firm belief in the Faerie Folk stemming from the
mythologies and folk beliefs of the Celtic and Norse Peoples. The Faeries are
sought for protection, companionship, wisdom, knowledge, inspiration, and
magick. They are invited to all of the Rites and Rituals, and they are
acknowledged in every aspect of life. Along with this comes a respect for all
creatures, both great and small. For the Fey are Shape-Shifters, and can assume
any shape. from a lady bug, to a bear, to a rock, a tree, or spring mist.

Magick is an integral part of the Faerie Shaman Faith. Magick is the art and
science of causing change in ones environment in conformity with one’s will.
Magick can be used to heal, to divine, or to assist in the obtaining of goals.
The only possible limits of Magick are the self, the imagination, and the
knowledge of the Faerie (or any other) Magickal System.

In Faerie Paganism, the natural human body, soul, and mind are seen as
beautiful, powerful, and divine. Human beings were not cast out of paradise,
they are born into it. Human beings are not born inherently evil or bad, they
are born innocent with the gift of choice. Human beings do not answer to the
laws of an omnipotent god, they answer and account for their own actions. And
the eternal afterlife of a human being is not judged by one lifetime alone. many
lifetimes will be traversed before we are all reconnected with divinity.

Finally, in Faerie Paganism, there is the communion with the Ancient Divinities
of the Ancient World. the Gods and Goddesses, Heroes and Heroines of the ancient
Celtic and Norse lands. The original race of Faeries who first came to the Earth
from the Stars were known to the Celts as the Tuadha De Dannan, or People of the
Goddess Dana. Eventually, when the Milesians (humans) came to inhabit the Earth,
the Tuadha De Dannan moved into the Realm of the Faerie, or Faerie Land. We know
speak and commune with them when we travel to their Realm or when they cross
over into reality….”