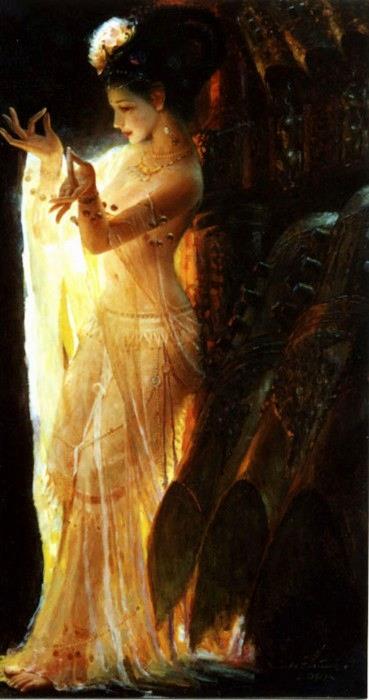 “…Forests have always been central to Indian civilization. It represented the feminine principle in prakrti. In the Hindu pantheon, forests have been worshiped as Goddess Aranyani, the Goddess of the Forests and Animals that dwell within them. Forests are the primary source of life and fertility. The forest as a community has been viewed as a model for societal and civilizational evolution.

The Indian civilization was guided by the diversity, harmony and self-sustaining nature of the forest. Aranya means forest. The Aranyakas form the third part of the Vedas. They were developed by the hermits, living in the forests. They reflect an explicit transition in the philosophy of life of man. So ‘Aranya Samskriti’ the culture of the forest was not a condition of primitiveness but one of conscious choice. Indian culture considers the forest as the highest form of cultural evolution.

As a source of life nature was venerated as sacred and human evolution was measured in terms of man’s capacity to merge with her rhythms and patterns intellectually, emotionally and spiritually. The forest thus nurtured an ecological civilization in the most fundamental sense of harmony with nature. Such knowledge that came from participation in the life of the forest was the substance not just of Aranyakas or forest texts, but also the everyday beliefs of tribal and peasant society.

The forest as the highest expression of the earth’s fertility and productivity is symbolised in yet another form as the Earth Mother, as Vana Durga or Tree Goddess. In Bengal she is associated with Avasthhaor or Banbibi, the lady of the forest. In Comilla, Bangla Desh, she is Bamani, in Assam she is Rupeswari. In folk and tribal cultures especially, trees and forests are also worshiped as Vana Devatas or forest deities. In the Southern Indian states, the concept of Vana Devatas means forest spirits.” (1)

“Aranyani has the distinction of having one of the most descriptive hymns in the Rigveda dedicated to her, in which she is described as being elusive, fond of quiet glades in the jungle, and fearless of remote places. In the hymn, the supplicant entreats her to explain how she wanders so far from the fringe of civilization without becoming afraid or lonely. She wears anklets with bells, and though seldom seen, she can be heard by the tinkling of her anklets.[1] She is also described as a dancer. Her ability to feed both man and animals though she ’tills no lands’ is what the supplicant finds most marvelous. The hymn is repeated in Taittiriya Brahmana and interpreted by the commentator of that work.[2]

Aranyani bears resemblance to later day forest deities like Bonobibi in Bengal and Vana Durga. Her worship has declined in modern day Hinduism, and it is rare to find a temple dedicated to Aranyani.” (2)

1. GODDESS of wild and forest who seemest to vanish from the sight.
How is it that thou seekest not the village? Art thou not afraid?
2 What time the grasshopper replies and swells the shrill cicala’s voice,
Seeming to sound with tinkling bells, the Lady of the Wood exults.
3 And, yonder, cattle seem to graze, what seems a dwelling-place appears:
Or else at eve the Lady of the Forest seems to free the wains.
4 Here one is calling to his cow, another there hath felled a tree:
At eve the dweller in the wood fancies that somebody hath screamed.
5 The Goddess never slays, unless some murderous enemy approach.
Man eats of savoury fruit and then takes, even as he wills, his rest.
6 Now have I praised the Forest Queen, sweet-scented, redolent of balm,
The Mother of all sylvan things, who tills not but hath stores of food.(3)

‘Akasha is a Sanskrit word meaning “sky”, “space” or “aether” and is described as containing all knowledge of human experience and all experiences as well as the history of the cosmos encoded or written in the very aether or fabric of all existence.

It is derived from Hindu philosophy of Samkhya as well as ancient Tibetan scrolls and Buddhist writings. It is promulgated in the Samkhya philosophy that the Akashic records are automatically recorded in the elements of akasha one of the five types of elements visualized as existing in the elemental theory of Ancient India, called Mahabhuta which is not a religious book but colorfully historical stories across millions of years from a period of prehistory and pregenesis (a esoteric biblical dogma) period of a long dead advance civilizations due to war and other calamity.’

Notes from the artist: ‘Akasha is the first material element created from the astral world before Air, Fire, Water, Earth (Hinduism religion).’